The Vichy Exposome Grant, created and supported by Vichy Laboratoires, consists in 3 regional research grants of €15,000 to promote and encourage research to characterize the skin exposome.

What is the Exposome?

The exposome is the globality of the factors the human body is exposed to, from conception onwards. It complements the genome.

For this highly complex interaction, the term exposome was coined by Dr. Christopher Wild at the International Agency for Research on Cancer, World Health Organization. 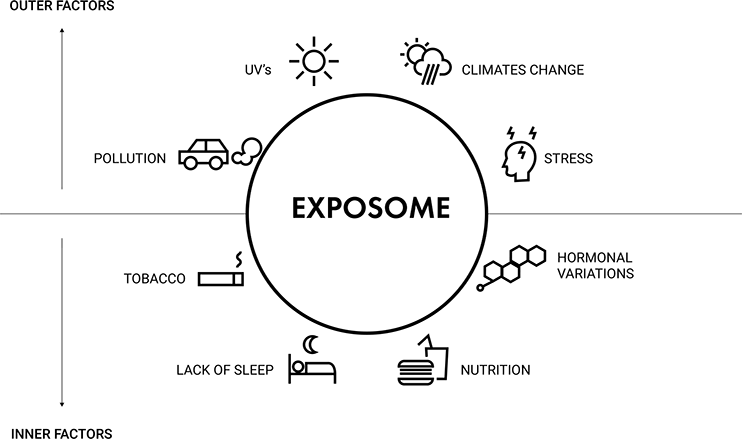 About the Vichy Exposome Grant

3 regional research grants of €15,000 each are awarded each year to research projects in the field of exposome and skin. Each grant is awarded to one project originating from one of the following regions

The applications are reviewed by an independent jury of experts

Eligible applications may consist in research projects in the field of exposome and the human skin, including projects dealing with skin conditions and diseases, either fundamental or clinical, conducted in any hospital, university or other not-for-profit research institution.

Application related to completed projects will not be considered, as well as project involving animal research, or project investigating medical devices, medicinal or cosmetic products.

Award funding will be disbursed to the host institution. The money granted must be used to accomplish the described research project.

The 6th edition of the Vichy Exposome Grant will be announced at the EADV congress 2021.

Feel free to reach us out via email [email protected].

In 2021, a total of 86 grant applications were submitted from 36 different countries worldwide.

Laureate for the Asia Pacific Region

Skin microbiome exerts a major role in maintaining tissue homeostasis, educating, and modulating immune responses or contributing to various cutaneous pathologies. We have recently shown in preclinical models that skin microbiome significantly hampers the immunosuppressive effects of ultraviolet radiation (UVR). However, the nature of the microbes which inhibit UVR effects, and their underlying mechanisms remains to be uncovered. In the proposed project, we hypothesize that specific cutaneous bacteria impede UV functions through their ability to metabolize cis-urocanic acid (cis-UCA), one of the major immunosuppressive metabolites produced upon UV exposure. We will then examine different bacterial species from the Cyanobacteria and Bacteroidetes phyla, which increased in their abundance upon UV exposure, for their capacity to capture and isomerize trans-UCA, the precursor of cis-UCA.

We will determine whether they use cis-UCA for their growth, survival, and/or to acquire pathogenic features through the production of virulence factors. In second step of the project, we will examine the capacity of the respective bacteria to prevent the immunomodulatory effects of cis-UCA on reconstructed human epidermis. Finally, we will test for different inhibitors that modulate the metabolism of urocanate pathway to restore the immunosuppressive properties of cis-UCA. Our results should bring major insight to better understand how skin microbiome regulate immune responses at the skin interface, and open avenues to optimize the therapeutic protocols which utilize the immunomodulatory properties of UVR.

« The interplay of long-term exposure to multiple air pollutants and climatic conditions, and their combined effect on extrinsic skin aging in China »

Skin aging is an important health issue and public concern. In the real world, the body’s skin is exposed to the mixture of different air pollutants and climatic conditions (e.g., ambient heat) rather than a single environmental factor. Although the individual impact of these hazards on skin aging has been discussed, their interactive and combined effects remain largely unclear. As a result, the role of exposome on skin aging may have been underestimated. The lack of investigation is particularly true in China – a country is facing a heavy health burden from air pollution exposure, climate change, and population aging.

To fill the research gap, this project will explore the independent, interactive, and combined effects of chronic exposure to different air pollutants (i.e., particulate matter, nitrogen dioxide, and ozone) and ambient heat on skin aging in the Chinese elderly. The project will make use of the Taizhou study cohort. Located at the junction of north and south China, Taizhou is in the middle of the spectrum – both geographically, climatically, and genetically, which promises the representativeness of our results. The findings will help to understand the impact of environmental factors as a whole on skin aging in Chinese elderly.

Research on skin health involve interdisciplinary subjects. On the one hand, the individual's behavior, lifestyle and genetic factors. On the other hand, external factors such as exposure to the sun, weather and air pollution. The lack of studies that integrate these intrinsic and extrinsic factors limit the advance of knowledge about skin health. This lack is due to several factors, such as:
a) difficulties in integrating interdisciplinary research;
b) the limited use of recent data analysis tools (data mining, big data, machine learning, etc.);
c) the high cost of collecting, storing and transmitting data provided by obsolete systems; and, specifically related to the extrinsic aspects,
d) the lack of consistent meteorological measurement networks, mainly in less developed countries.

This research project aims to integrate low-cost environmental measurements, data transmission systems and data analysis to provide scientific and educational information for the industry, scientists and society. For this purpose, we propose an experimental set of environmental measurements based on a new generation of low-cost instruments and wireless data transmission performed in different Brazilian regions. In parallel, studies on photoprotection behavior and skin damage can be conducted in these areas. These data will feed a database for deep analysis based on statistical tools. This research project will be conducted by a multidisciplinary team involving physicists, doctors, chemists and engineers. We hope that this interdisciplinary effort can bring relevant contributions for the understanding of skin exposome.

Skin is chronically exposed to several forms of exposome factors such as ultraviolet, cigarette smoke, particular matters and ozone. Although skin have an efficient defense system, prolonged or repetitive exposure to high levels of exposome factors may have profound negative effects.

Exposome factors damage skin mostly by inducing oxidative stress and inflammation defined as « OxInflammation ». Inflammasomes could act as a central hub in the crosstalk between the altered redox and immune homeostasis induced by exposome in the cutaneous tissue.

The study plans to investigate the role of prolonged or repetitive inflammasome activation in skin oxinflammation induced by exposome factors such as UV and O3, in particular demonstrating their possible synergistic effects.

"Impact of the exposome on the human skin microbiome"

The human skin, our largest organ, is a complex ecosystem of diverse microorganisms, consisting of bacteria, fungi, viruses, mites and archaea. Symbiotic microorganisms protect against invasion by opportunistic pathogenic microbes and calm the immune system.

In this project, we would like to understand the composition and functional stability of microorganisms on human skin in the presence of typical exposures like desiccation, UV-radiation, temperature, moisture, pH and cosmetic products. Our insights will help us to retrieve critical information on the impact of the exposome on the archaeal and bacterial skin microbiome and to evaluate a potential use of skin probiotics.

The implications of the results of this research may be multiple. They may contribute to the understanding of the physiology of the skin and its maintenance.

Firstly, if short chain fatty-acids (SCFA) are responsible for the maintenance of the homeostasis of the skin, it then remains to be determined whether the composition of SCFA is altered under various inflammatory conditions and whether this is associated with an alteration of the composition of the commensal microbiome. Secondly, if SCFA are potent modulators of skin Regulatory T cells (Treg), they may be utilized for the therapy of inflammatory skin conditions.

It is superfluous to say that SCFA are natural substances which lack toxicity and thus may gain broad acceptance, even as ingredients in cosmetics with the ultimate aim to avoid skin irritations and inflammation. If it turns out that an alteration of the microbiome precedes skin inflammation, the final challenge will be to seek alternatives which will help to restore the physiologic microbiome.

The research results were published in June 2020 in the Journal of Investigative Dermatology:
Induction of regulatory T cells and correction of cytokine dysbalance by short chain fatty acids – Implications for the therapy of psoriasis
Schwarz A, Philippsen R, Schwarz T
J Invest Dermatol. 2020;S0022-202X(20)31656-0. doi:10.1016/j.jid.2020.04.031

"Analysis of the combined effects of air pollution and sun exposure on extrinsic skin ageing on a German SALIA cohort of 800 women."

The SALIA cohort was set up over 30 years ago to investigate the effects of air pollution on lung function, inflammation and ageing in women. There were two study populations, one from rural areas and the other from the highly industrialized Ruhr area of Germany.

A wide range of baseline health measurements were established, with questionnaires on lifestyle factors and skin factors. In 2006, with air pollution declining, the women were assessed again with about 800 having detailed examinations that included an intensive skin ageing assessment using the well-established SCINEXA skin ageing scoring system.

Extensive data sets exist on air pollutants in the Ruhr area. Land use and traffic information sets have been used as proxies for exposure to near road pollutants and the German weather service is able to provide data on direct solar radiation and diffuse sky radiation closest to the residential address.

The 2016 Vichy Exposome Grant was used by the team, with the help of a statistician, to prepare the data sets and then re-analyse it, in order to compare the interacting effects of pollution on skin ageing.